*We interrupt all things holiday related for a little update on the Tedster. I have gone back and forth about sharing this post. But, I do feel that this is good information and something that may help someone else with their own kiddo down the road, so here we go…it’s a long one…

If you have followed me for awhile, you know that Teddy has struggled with fine motor skills (FMS) for a couple years. We did not realize the extent of it until we moved here. He was in Montessori school in California and we did not see or hear of any struggles…they used their hands a lot in class, so that came as a bit of a surprise originally. We moved here and the first day his preschool teacher told me it was a huge issue that he couldn’t write his name at 4 years old. So, we began the process of working on writing (a lot!!!) and working with an Occupational Therapist (OT) each week. It took us a bit to find one who meshed well with Teddy, but we did and she has been fabulous. Kindergarten was a bit of a struggle for us. The class itself wasn’t a great fit, but we all worked hard to try and get Teddy where he needed to be. The reading was a hard concept to grasp, as well as the writing. But, we ended kindergarten where we needed to be and Teddy was ready for first grade. Over the summer, we toyed with the idea of repeating kinder, but after some talk with our OT, lots of prayers and lots of talking amongst ourselves, we decided to move forward to first grade. After about a month of school, Teddy was coming home in the worst mood. Just not himself and so off. We could not figure it out. He is a very happy and positive kid typically, so this was so distressing. His OT mentioned maybe something was going on at school. She said a lot of times kids will hold it together at school, then come home and fall apart. Made total sense to me, so, that afternoon, I text his teacher to check in…she replied that we should meet for a chat the next morning. I must admit, I laid awake most of the night worrying because I just knew she was going to tell me he was struggling…I just knew. Mother’s intuition, right? A few friends that I talked to that night, said it might be nothing, but I just knew it wasn’t and I was right. He was struggling big time with the work in class. He was doing it, trying his best, but it was really tough and too fast paced for him. The worst part is, he noticed it. He questioned why he couldn’t get his math finished as quickly as his peers, his writing, etc. So, we discussed the possibility of moving him back to kindergarten to give him an extra year. The consensus from the school was that this was the best option, so that he was not constantly struggling year after year. Obviously, this was the last thing we wanted to do. Mr. Fancy and I had LOTS to discuss and lots of things to figure out before we made a decision. The next day after this meeting, my grandmother passed away, so everything was put on hold. I just could not process anything like that while mourning the loss of one of my favorite people. We ended up having LOTS of meetings with the school to determine what to do. One of the amazing women that I met with, suggested that we get Teddy’s eyes checked. This was so odd to me because he has ALWAYS passed his eye exams at the pediatrician and at school with 20/20 vision. But, I figured you know what, why not? So we made an appointment with a pediatric ophthalmologist. Thankfully, she had an opening two weeks later…the one place I called didn’t have an opening until February! EEEEKKKK!

Now, going into the appointment, I was still thinking we would leave with them telling us that his vision was fine, because again, he has ALWAYS passed his eye exams. Five minutes into the appointment, the doctor says to me “Yep, he’s farsighted!” Um, what?! A million things ran through my head at that moment. One of the first things I wanted to do was blame myself. “He can’t see and we had no idea! Of course he struggles with reading…he can’t see for crying out loud! How could we miss this?!!!” But, the doctor must have read my mind because she said “Ashley, you can’t blame yourself. There is really no way you would have known, because he’s probably never been able to see properly, so he doesn’t even know that he can’t see properly.” So, for the next 45 minutes, I watched, I listened and I learned in complete fascination, all about what was going on with Teddy. Not only is he farsighted, but he also has mixed eye/hand dominance, which means it takes him longer to process things…again something I would never have known! Did you know you have a dominant eye and it should match your dominant hand?! I did not! There was so much more that we learned, none of that matters here, but oh how thankful I am for this doctor! I only wish I would have known to see her years ago. But, it is what is it is at this point and we are looking forward, not back! I left the appointment and cried happy tears in my car, because there was finally an explanation for a few of these things. We went right to the glasses shop after our appointment and picked out some glasses and he is thrilled to wear them! We finally got them yesterday! He will wear them all day for a few months and then eventually, they will be school and reading glasses. She believes he will grow out of this eventually. One of the most fascinating things to me about the appointment was that she threw him a ball and he couldn’t catch it. Then she put some glasses on him, threw the ball again and he caught it. We always thought it was just a coordination thing and that he would learn how to catch in his own time. But, he has struggled with catching because he can’t see the ball coming at him! Then, she had him copy some shapes…the one shape was a rectangle with an X in the middle. He drew the shape in 6 different pieces…she said to me “See how he drew the shape? That’s how he sees it, in pieces!” Seriously fascinating. I see a rectangle with an X. Teddy sees a bunch of small, blurred shapes. Her thought is that Teddy has always had this vision issue and that is why he has FMS issues. Of course there is no way for us to know this for certain, but this is the thought. That is why he didn’t use his hands much as a baby and toddler. And that is why, he has never been able to tell us that he can’t see well, because he sees how he has always seen. I am still baffled that this has never been caught before in reading or eye exams. It’s shocking and hard to believe, but the doctor says it happens all the time. The good news is that Teddy is going to literally see the world in a whole new light and we are SO excited for him.

Now, the main reason that I wanted to share this is, if your child is struggling in school, consider an eye exam from a pediatric ophthalmologist. Even if they pass their school/doctor’s office eye exams. Until a week ago, I never knew how inaccurate those tests are. I mean, it said Teddy had perfect vision…he doesn’t. I wish I had known this was even a possibility and that we had had his eyes checked sooner. We have always just trusted those tests. You better believe Reagan will headed to see this same doctor in May. She recommends all children to get their eyes checked the summer before they start kindergarten.

A week before his eye exam, we made the tough decision to let him go back and have an extra year of kindergarten. As parents, we were so nervous to tell him this news because we just knew he would be devastated to leave his friends. While he was bummed, he was also excited for his new class. He has made such an easy and inspiring transition. Seriously, I am amazed by him. He has not skipped a beat! He has the most amazing teacher and I am so excited for him that he gets this bonus year. His confidence was better almost immediately and he’s only been in this new class less than two weeks. I worried we would regret the decision, but even after finding out about his eyesight, we are confident and at peace with our decision. Just seeing and hearing how much he is excelling, helps to solidify our decision even more and we could not be happier for him. 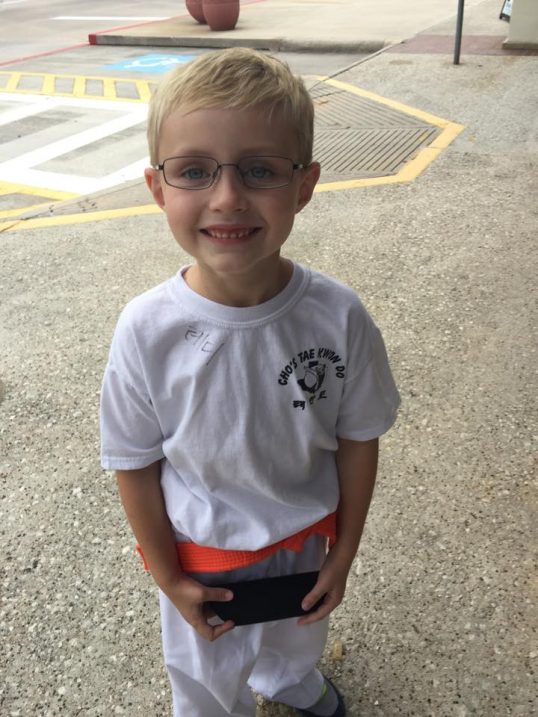 I honestly hope our story helps at least one person. I think it’s always nice to hear other peoples’ experiences, especially with parenting and school issues. It is easy to feel alone and isolated when your child is struggling, especially when you hear about other kids who are thriving in school, reading etc. But at the end of the day, we are all doing our best, kids included! And sometimes, the answer is not the answer you thought it would be! I never thought eyesight could be the root of a lot of our struggles, but it is and we are so grateful that Teddy can now SEE! Watch out world, the Tester is going to do amazing things! XOXO! 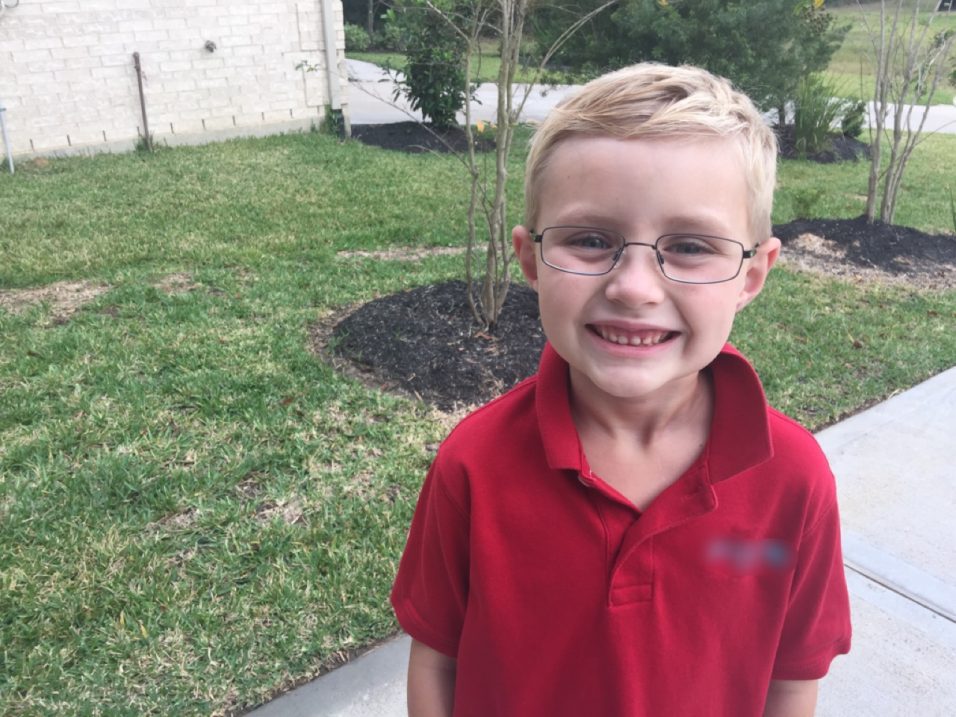 Welcome to The House Of Fancy

Get The Fancy Ashley Summer Lookbook

Fancy Delivered to Your Inbox